Saturday night fever, with no fever 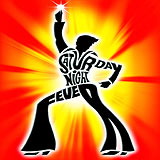 West End in London has world-class musicals. But in this week I did see the musical Saturday Night Fever, it was not near as good as the movie. Intact it was the worse musical performance I have seen in the world! And this was in the West End. 95% of the professionals on stage were more aerobic instructors than dancers (you will find better disco dancers at your local disco). Off course some of the artist was great and is going to make it big one day, but most of them were only the wrong people at the wrong place. Don’t want to be hard on them so this is quite nice critic compared to the level of the performance. People around me in the audience fall a sleep, and there where nearly more people on stage than in the audience.
It would be great if West End ore Broadway will do a musical only preformed by armatures, with an audition like they have in soaps as in American Idol etc. They could send it in the television and rich a younger audience, by television and “word on stage.” This musical could then have fond a REAL Tony personality and not a professional with no personal connection to the roll that they should be and not styling up a personality?
Back at the evening with no fever: In the grand finale they wakened the audience by invited them to dance along with them… HELLO… wasn’t disco about doing it with everyone, al the time? Why not start the hole musical with having the audience doing an warm-up dancing and end it with “an traditional finger in the ala Travolta?” That would kick us of for some 1970 feeling. Instead it was a perfection performance with no passion and connection with the audience. If you go to a 1970 musical you have a relation to that time period. The Saturday Night Fever musical have the same potential as Fame and West Side Story to be a classical but not without passion and more work to make it REAL. The reason for this demand is those billion people how can and want to see them self in the mirror of the 1970.
I did study for my self to become a professional dancer for many years and I did recognize the problem this evening: Professionals are more in to perfection than the passion and joy it is and should be to dance.
How do you think armatures and professionals could work together? Could this ONE musical develop into a talent evenings at disco clubs around the world? Could it be a trend at big clubs to have this Saturday night evenings (combined entry fee with musical tickets)? How should you play ore dance in it? Is there any other musical you would like to act in? Is professionals stuck in perfection? Can armatures communicate better with passion and real attitude than some actors? How can the performance of the musical be ONE with the audience? Could it be performed at a disco (the audience world not now if it is an actor ore audience and everybody could sing along, and dance al night without falling a sleep)? Could it be served Italian food in the evening? Witch is the scene’s that could be involved this evening? How fare can this concept go? Where in the world would it be most popular? When did you do some Travolta dancing last time (maybe Tonight)?