This week I was in Paris and attended in the audience at Roland Garros. Did not like tennis before playing it on Top Spin at Xbox. A great game that made friends and me try to play in real life (see photo). The next step was to see the Grand Slam life. It was great to see the great players as Nadal and Swedish Jonas Bjorkman (see photo). It was so close that I could plug and play my Xbox joystick, (if I got it with me). The problem with male tennis is that the first serve kills the game. A suggestion to get them to play more tennis instead of killing it with the first serve is 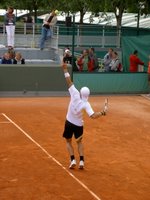 simple to take it away. If they only got one serve they will not take the chance to win with the serve and instead concentrate on the game (that’s why we are paying for the ticket and watching them). The woman tennis was much more interesting and made the audience scream for more. It would be great if the players was updating there Top Spin profile live, when they where playing. Ore if I could plug my joystick into there body and play (it is coming but how soon?).