If you are CEO of the probably smartest companies on earth, then you probably are pretty smart. As you understand I am talking about Google and their Global CEO, Eric Schmidt. I met him at the Cannes Lions where he held a lecture. I have been studying and writing about the potential of Google for many years, so it was most trilling to finally meet one of the person behind this genius corporation.
Even for mighty Google every strength is a weakness. Google’s online knowledge makes them week offline (in my opinion). An example is to bring Google AdWords into the off-line world of real life – a simple idea that could increase Google’s sales by a factor of 99% (that will make every town an shopping mall).
I asked Erik at his lecture: Why not build and Google town? His answer was as open-minded as his corporation: first he laughed but then Erik said: Often employes come in to my office and suggest ideas that are wild, and one of them are why not build a Google town. We do a lot of things but to build towns is not the focus we have right now, but if someone else would finance it we could think about it (as long as it is not our money). 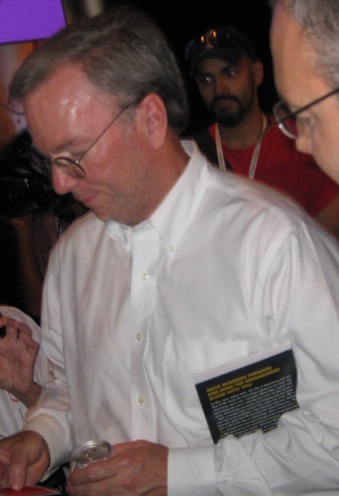 After the lecture I manged to pass by media and guards to get to Erik and give him my latest book: The Fall of PR & the Rise of Advertising (see photo). First I open the book and showed him this idea road sign to Google Downtown, he smiled. I gave him the book and said I want to build Google Downtown and in my book I explain how it could be built. I did not have the time to mention that I even have been speaking with international building construction corporations specialized in building town for millions of people. These kind of corporations are building everything from a to z (roads, buildings, water, electricity etc). Of course I haven’t mentioned Google in my meetings with these construction corporations but I could easily present and finance the idea for how to make it happen. If Erik has the time to listen I will promise to show how I mean it could increase Google’s sales by a factor of 99%.
Some background, I did start to blog about the idea of Google town in 2007, I also have asked questions about it at seminars as Sime (2008) to local CEOs at Google. In the beginning every body laughed but with Erik it was different – he has heard about it and been thinking of it… I hope my book can persuade him to take the next step. Mentally I already live in Google town. I think I was the first person to think about about Google Downtown but that doesn’t matter, what matters is if and when it will be built.

If you are going to have an innovative culture, you have to try things that actually not work, to be innovative.
Global CEO, Eric Schmidt, Google