To play with timing + the value of the product + context 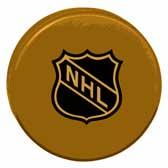 When the NHL strike of 2004 had gone on into 2005 without a solution in sight, economists pointed out that the effects of the strike could be seen in the national economy of Canada. Entertainment is big business and when the fans are deprived of their experience on the stands, they go over to other sports such as basketball and American football. When the strike is over, the audience may be significantly depleted if the sport hasn’t managed to keep interest alive. Let’s take a look at what ONE can do.

Wouldn’t it be great to let the fans replace the NHL pros during the strike just as women players replaced the male pros who had gone off to World War II? The strike would be a great opportunity to bring the sport back to better sporting values with a ONE NHL Cup. Becoming one with the fans would reduce violence in the stands – the problem of having to act out would disappear when fans themselves are on the ice.

What is the ESPN angle? And what about sponsors?

Let’s say that one of the world’s most popular sports is golf, which to a certain extent is about relaxing, taking out your aggression on a little hard ball and getting control over your life.
Golf is a kind of therapy and a back to nature escape. How can ONE help make the player ONE with the universe? ONE goes beyond make-up!

What other sports can you apply this too?