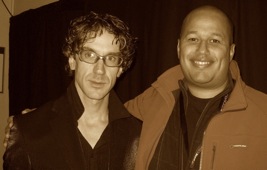 Paul “Pablos” Holman used to be a traditional hacker showing how bad security is working. His computer skills and personality lead to his nickname “the Madonna of hackers.”
I had an exclusive interview with Pablos when he was in Sweden holding a lecture at the Sime conference: Security is not “sexcurity” it is not a challenge to break into today´s IT structures. In fact the only problem is the legal process that hackers risks to face afterwards (and it does not help to be a world famous hacker). A big problem with today’s IT security is that hackers cannot prove or say that a company or website like MySpace has a weakness (because then they will sue you for hacking them). Today security is not a challenge for the best hackers. Pablos has a positive mindset: “A hacker’s mindset.” So he started to use his knowledge in developing the world. He is in the business of breaking things down and putting them together again. That is the same way the evolution of nature is working. When he discovered this he saw that if he could “hack into nature,” then he could change the way nature reacts. In his lecture he refers to that hurricanes such as Katrina and Malaria and Polo could probably be controlled if hackers could hack into nature processes to control or stop it. He is also working with trying to solve challenges such as energy, food and other big issues in our world. It is like he pointed out:

Hackers mindset. Are in the business in breaking thinks.
Paul “Pablos” Holman

I have always been fascinated in discovering and developing talents. Talented minds as Pablos may not have the education, background that the business world demands. But still hackers prove to be much smarter than the best IT educated minds in the world. Pablos is using his talent to work with “the nature” and with “the nature of business.” It would be great to take the 100 best hackers in the world and work as Pablos to improve the world to a better place by hacking into nature. Why don’t FN or a charity organization organize this? for example “Solve problem x in 48 hours.” Could hackers be an alternative SWOT team working to solve problems from inside natures code.