Many people would probably have taken him for an extremely eccentric person with a talent for acting when on stage during Stockholm Media Week. And yes, he probably has both those qualities, but above all else, he beams with 100% passion for what he does, for people and for entrepreneurship! 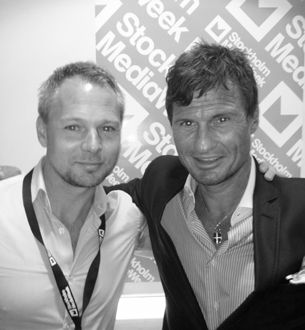 For me, the event Stockholm Media Week has really exceeded all expectations by bringing one of the best entrepreneurs of the Nordics; Petter Stordalen. The Norwegian billionaire has built the leading hotel chain of the Nordics (Nordic Choice Hotels) from the ground and isn’t it always something interesting with a super entrepreneur and billionaire with “rock star” status who want to change the world?

Picture: To the left our Per Nilsson who interview Petter Stordalen.

What do you ask such an extraordinary person when you are lucky to have a one-to-one talk for 30 minutes?

Petter starts by explaining that it is absolutely essential that you are certain you want to become an entrepreneur, because it is a very hard thing to do with an enormous amount of hard work. You need the ability to not give up for anything and to drop the fear of failing.

We continue to talk about that it’s a pity that we not so often hear about the failures behind the success. Because, of course, it is a fact that all those who have succeeded also have failed at some point in life and that it is indeed that key lessons that took them to success. In Nordic Choice Hotels (owned by Petter through his company Home Invest), it is ok to fail and everyone is encouraged to make decisions. Petter says that you have to motivate those who try, and that the ones who fail and step up to try again are the ones to bet on. Those who simply won’t give up!

We get into talking about mental abilities. Many people have ideas but few actually carry them out. Few can take all the hard work it takes to achieve their dreams and carry out ideas. Petter talks a lot about making decisions and that it ultimately come down to having made more right decisions than wrong decisions. Again, the only way to know the difference is by having the courage to make decisions with the knowledge that you risk failing.

I asked Petter how important money has been for him as a motivation. I added that I’m more curious about how important it was for him early in life before he had plenty. “Money is just a tool” responds Petter. “It is just a tool to implement ideas and realize things”.

I recognize that view from other extremely successful entrepreneurs. They are striving for something more than just money, and they will never stop!

Speaking of stopping, Petter continues to share his view on success;

Success is something that you have had, and will have, not something you have. The moment you have it and become content you will lose it.

One must always strive for a goal and to be better, a better person. Petter now strives to change the world and the environment. He wants to leave behind a better world for his children. At Nordic Choice they are working hard to become environmentally friendly, serving completely organic breakfasts for one thing. Petter firmly believes that a modern company needs to make such values an essential that part of the company.

Until now I’ve gained more useful knowledge about the core of entrepreneurship than all the books I’ve read on the subject. But it is only now that I actually see one of Petter’s strongest features, his interest in people. He begins to ask me about what I do, about my entrepreneurial projects, what we do, if we have a great team, etc. He mentions how important it is that you work with good people and how important it has been when building his companies. For Nordic Choice today, he mention, it is not a problem if they have 10 people that is wrong for the culture, they be thinned out pretty quickly, but in a small team it is extremely important with the right combinations.

We are interrupted by a call that Petter has to take, with one of his CEOs, probably on one of the huge hotel projects he has going on in Sweden, Stockholm, Gothenburg or Malmö. We wish each other good luck and I leave inspired by what this man has shared with me and what he has accomplished.