Extreme Branding – is not a sport

Published by Stefan Engeseth on december 16, 2006

In extreme sport you try your limits. It’s the same with “Extreme Branding” by taken your brand to places it never discovered before. This will expand the limits for business. ONE way of doing this is letting consumers using your brand as sport fans use a mountain bike – they drive with it. And then you will end up in new places with new markets. To be nr 1 is no sport to be ONE is.

Published by Stefan Engeseth on december 14, 2006

Published by Stefan Engeseth on december 10, 2006

Companies strive for having loyal consumers, but what’s in it for the consumers? At the place where I go swimming I did try an idea for a free year now when I am the third generation consumer. The person behind the desk was kind put did not get the point. Then I explained my first point; I have been a costumer here since 1940 when they build the place, for how long have you been here? Still they did say no. This is so strange for me; I now more about the culture of the place than the whole staff working there today. The story of the third generation rule should make consumers “feeding the story” and it would rule the word of swimmers to stay loyal for generations (it not what companies want?).
What do you think about the third generation rule? How many consumers do you think are qualified for the rule globally ore in your country? How many of them in % do you think companies now about? Are you qualified for the rule? What should companies do to make you what to become a consumer for tree generations?

160 photos that al works like a link from The Netherlands

Published by Stefan Engeseth on december 7, 2006

Last week I was visiting The Netherlands for 3 days and did take 160 photos! The reason I was there was for holding a lecture. It is amazing that what ever I did take a picture anybody watching it could tell that it is from The Netherlands. How many other locations in the world do have that unique look and feeling? It is, like my photos are becoming a link back to the place it was taken. Did put al the 160 photos down to my favorites in a PDF, take a look here and see if you see the link in them.
In what location in the world does you think visitors take the most photos? And how will this increase word of mouth? How unique is your city/land? If you take photos where you live, does they work as a link for the viewer?

Published by Stefan Engeseth on december 5, 2006

Traditional metal detector is almost never with you when you walk over the treasure that would make you a billionaire. Here is a simple but cool idea, why don’t build them in your shoes. One every step you take you can find billions. That massage would be the fastest solution for America’s health problems in history. When adding metal detector into sport shoes it could sound like this: Nike – Just find it!

Unexpected meeting with the father of Google

Published by Stefan Engeseth on december 3, 2006

At a lecture for MarkIT Expo I did not now that the fan of Google I was talking about was in the audience. Elias Kai is father of Google-Kai. Here is his reaction when my speech suddenly was about him and his masterpiece of work:

“At this precise moment, everyone was shocked and I had my heart beating at 10100 and I was going to stand up but I kept it to myself and went and gave Stefan a big Hug on ONE way.” Google-Kai.com

Thanks for a great talk afterwards and for the future of our friendship.

Published by Stefan Engeseth on december 1, 2006 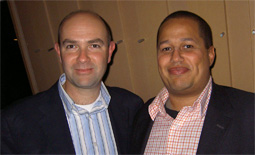 This week Chris Anderson (left in the picture) and myself (translation) were the Keynote speakers at Marketing3 in Amsterdam. So many people have told me that there is a strong connection between my book ONE and Chris’ bestseller The Long Tail. So I started to get a lot of request to do lectures with Chris, this being the first one. Chris is one of those speakers who is like a walking library; you could actually use him as a human Google. I live in Stockholm and he lives on the other side of the globe in California. It was amazing to here Chris talk about the same points and values surrounding consumer power. Then he told me that one of his parents is Swedish. When I told him about the closeness of our books and their topics, Chris asked whether he would be stepping on my toes (he was giving his presentation before me). I told him that I was a former dancer, so there’s no reason why we can’t dance together with the flow of consumer power (and he did dance good!). 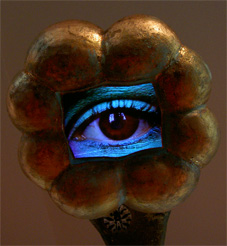 ONE Long Tail?
All of these coincidences must have meaning. Not that I want to take any credit for what Chris has a done! My goal is only to give credit to his great book. As a Christmas gift I am thinking of giving away 100 copies of Chris Anderson’s bestseller The Long Tail to those people who buy my book, ONE, on Amazon.com in December.
What do you think of this idea? Is it a stupid idea or a good one? Could Amazon.com organize it? Will this make us dance forever?

Sponsor for my lecture: Web Power.

Update 7 December:
Did put al my 160 photos from this trip down to my favorites in a PDF.

Published by Stefan Engeseth on november 28, 2006

Most companies only listen to consumers when they are in trouble. But most of them don’t know when they are in trouble ore they don’t care. That’s why companies can keep selling us cars that in fact are nothing more than a new painted T-Ford. It is time for consumers to take control of the evolution. The open source system is good but it is not aggressive enough, we need a team of “consumer SWAT” to open boardroom doors.

I don’t mean that it should be done with violence ore crime but the force need to hit where it heart the most – bottom-line actions. How ones the brand if not the consumers? So if you want a car that is more than a new painted T-Ford and product and services that not looks like a history book you can build your self a positive consumer SWAT. How will be the first to put up consumerswat.com to provide what whispers with action can do with Word of mouth?

Word of senses at K1

Published by Stefan Engeseth on november 27, 2006

This Friday there was the competition in mixed martial arts K1 here in Stockholm. The coolest think with this evening was the audience/fans. Most of them are training them self. X000 of them where using a pain relieving ointment, Tiger Balm. The whole stadium was like a big scent event for Tiger Balm. With that sporty image they could do after-shave and other fragrance for does how maybe not are sporty but like to spread “the word of scent for Tiger Balm.” In other words, word of mouth can be without any words when it is spoken with other senses.

Published by Stefan Engeseth on november 24, 2006

Did hold a lecture this week for Association of Swedish Advertisers at the Internet MarkIT Expo. My books sold out direct and the interest for the ONE book in the IT community seams bigger than I understand. Another two day event for Internet in Stockholm that did end yesterday was the SIME 06. A good conference with leaders from the Internet tribe in Europe as the chief Ola Ahlvarsson and Andreas Weigend (ex. Chief Scientist of Amazon.com). Some of the big point at this conference was that the most important point in making success on Internet is consumer input. Another point that the kid’s panel gave was that it is only grownups and teachers are using email.
This morning on the news did the Swedish Government say that they are planning of supporting woman to start companies with 100 millions (Swedish cash). That could mean a lot to the IT community – that do need more female entrepreneurs and thinking (and speakers at conferences).