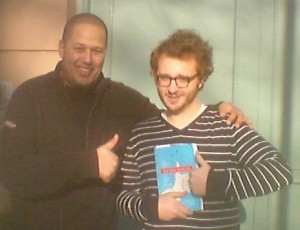 Few people understand the digital cultures we live in today. Christian Lander fonder of the mega popular blog Stuffwhitepeoplelike.com not only understand it he develops the being of our digital culture. He is in person the DNA of what his blog is about. His blog delivers what it promises stuff white people like (an collective updated mirror). It is that simple. Christian did point out that the key to become successful is to have an good idea and execution. As he pointed out there is a lot of good ideas out there but not many good executions.
Stuffwhitepeoplelike.com: Started 18 January, 2008. Got more than 58 million hits (hi-score for one day is remarkable 800.000 hits). His blog has become a book and is soon becoming a movie. I think Christian’s whole life sounds like a movie and he is partly agreeing with me. I did listen to his inspiring lecture today at Guldägget (Swedish). His attitude is interactive coolness. Did interviewed him after his lecture (photo above). He is humble like a Swede and thinks Sweden would be a crowded place if it was built like an city in the States (white people like Sweden).

Here is some of my questions to Christian Lander:
Could your blog become an fashion brand? Since you know what white people like?
Well, it is partly because we are making shirts (for charity).
Thats great, what about doing other products as for an example an special edition for Toyota Prius (how you said white people liked)?
We have not thought about that, but it would be really great to do.
I think it would be great if you could act  as your self in your upcoming movie, would you like to do that?
Yes, that would be really great (if they like to have me playing my self).

It was really great to meet one of the worlds best bloggers. Personally I think to many brands online are using social media as lipstick and not integrate it with their DNA. They can learn a lot of  Christian Lander is an open minded person who includes interactivity into his being (like talking with me). The blogpost: Asian Girl, has more than 12,567 responses. Because he doesn’t moderate it, it moderate itself (ever heard a brand saying that?).