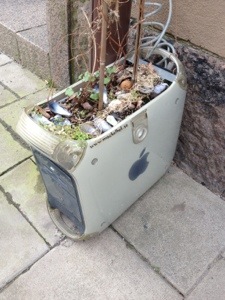 Apple Watch: Rethink every interaction, every animation, every function

Published by Stefan Engeseth on april 5, 2015

Apple Watch: Rethink every interaction, every animation, every function.
Wired.com

Published by Stefan Engeseth on december 15, 2014

AppleCurrency with Steve Jobs on the coin

Published by Stefan Engeseth on oktober 7, 2014

I predict that Apple will introduce their own currency a year after their launch of ApplePay. With the new AppleCurrency Apple can make cash on the demand. Today their brand does not live up to its demand.

Apple has created a shopping system in which all the products are connected to the system and to each other. This connection adds value to each product. Today demand is greater than what Apple is capable to live up to. Other brands are earning millions because of the huge demand that Apple creates but can not deliver. In such situations it is often profitable to change the business model, our contribution to changing the business model is an idea that is easy to monetize on.

A revolution should be led by Icon brands as Apple
Under the surface our economic system is questioned. Further, the economic system is not stable enough. It’s only a matter of time before a mighty corporation creates their own currency. Apple could lead that currency revolution and change history once again.

Steve Jobs changed the world and learned us that to Think different leads to development and change. We asked the talented designer Joachim Nordwall to design the visionary idea of an Apple coin as a tribute to the legend.

Also we hope that the message Think different on a coin, will inspire consumers to make a change with their consumption.

The digital AppleCurrency could be used on the Apple website but also in other online stores, and not least in the offline world as a common currency.

From: Connect the dots to AppleDots?
Certainly, many would give this currency and coins the nickname AppleDots linked to Steve Jobs classic statement: Connect the dots. Whatever it is called, Apple can with their own currency make the world spin around their Apple. If Apple in their ’shopping system’ strategy makes the value of consumption increase with their currency, the revolution is a fact that would make the legend smile for an eternity.

Download Apple coin and print directly in a 3D printer
Then go and test shopping with the coins in the nearest store or Apple store. If you don’t have a 3D printer there are companies as Shapeways that can help you print them. Download images and 3D formats of the Apple coin for free.

One might question the point of creating an currency when consumers anyway can pay with ApplePay?
Well, we would like to state that money creates money and Apple could with their own currency control and increase their profits. The opportunity to grow as a company with their own currency is far beyond their current resources. We see a million possibilities, but surely you’ll see more and Apple itself has surly internally a lot of ideas, so we’ll leave the rest to them and you.

PS Apple owns of course their own brand and this idea is only an idea, but most of all it is our tribute to Steve Jobs. The value of the coin is up to you to evaluate, we do not warrant that the coins will legally work for shopping but if your mindset is Think different then anything is possible.

Published by Stefan Engeseth on september 24, 2014

I predict that Apple will introduce their own AppleCurrency ONE year after they introduce ApplePay.

Why?
Apple has created a shopping system of products where everything is connected. The problem for Apple is that the demand they create is bigger than what Apple can provide with products (money paid for complimented products to Apples products and the culture connected to Apple is enormously large).

Brand image?
The revolution should be led by icon brands as Apple. Below the surface our economic system is questioned and is not stabile enough. It’s only a matter of time before a major corporation creates its own currency.

How?
AppleCurrency can be an offline currency with real coins. The coins can have the legend Steve Jobs face, further the shape of the coins can be as their Apple logo (with the bite).
Digital it can be used to buy products on Apple.com, Apple Store etc but also in other online shops.

What is the point when you can pay with ApplePay anyway?
Money makes money and Apple could make, control and increase their profit. AppleCurrency could change the world by being a powerful financial system that makes the world spin around the Apple.

The Apple ecosystem is like a swamp. The more we interact with it, the deeper we are drawn into it. Fortunately, it is a very lovely swamp.

Published by Stefan Engeseth on september 15, 2014

The Apple ecosystem is like a swamp. The more we interact with it, the deeper we are drawn into it. Fortunately, it is a very lovely swamp.
Mat Honan, Senior staff writer at Wired

Rasmus Ankersen: Is Apple the next Nokia?

Published by Stefan Engeseth on januari 14, 2014

Its fascinating to finally see more than me blog about Apples weakness as in this blogpost: Is Apple the next Nokia? does Rasmus point out:

It’s just worth remembering that the way we look at Apple today, was exactly the same way we looked at Nokia in 2007, six months before the iPhone was launched.
Rasmus Ankersen, The goldmine effect

In my blogpost: 6 Ways Apple Becomes Prey for Sharks did I also point out Apples weakness. Now is Apple weakness floating on the surface. Soon perhaps we will see an attack on Apple from competition? Now is the time to attack Apple and win the loyalty from their fan tribe.

Thanks to sharp Ulrika Bergwall for sending me this post!

Published by Stefan Engeseth on mars 8, 2013

Apple is losing focus in its strategy. Read Small Business Trends analyze why.

Can Google write the design code and compete with Apple?

Published by Stefan Engeseth on januari 26, 2013

Google may not have a Jony Ive, but there is nevertheless a coherent process for laying out a design vision across all these multiple teams and platforms.
Theverge.com (recoommeded read and video)

Yes Mr Ive is a master mind in design, but he is only one person writing a master code for design. If Google see that design is only a code, then they could use there speed to over take the design position that Apple dominates.

Thanks to Ulf A. Carlson.

Published by Stefan Engeseth on oktober 19, 2012

While analysts are treating Apple’s 4th consecutive week of losses on Wall Street as an investment issue, I think the company has bigger problems on the horizon.

Apple is becoming a top prey in the world of Sharkonomics.

Applying the principles of nature to business, sharks typically attack over-hyped companies with too many products, perceived strength that might not really be there, a temporary lack of competition, and leadership that isn’t moving as fast as the surrounding environment.

Here are 6 ways I see a shark-attack on Apple going down:

1.      A lead bite.  Sooner or later, Samsung’s advantages in product functionality will convince executives to stop following Apple and comparing products.
2.      Open-water pursuit.  Apple has been feeding in the same waters forever.  I compare its customers to the poor folks in Jaws, who were forced to spend the 4th of July either swimming in a limited area beach area of Amity Island or not swim at all.  Apple’s business model locks people into their solutions and eventually, a competitor will offer new software, new hardware or cross-over functionality between popular apps and other mobile products.
3.      Too much kicking.  Apple is doing lots of things like launching the iPad mini, but more of the same might end of making the company an appetizing target for sharks.
4.      Bite from a great white.  The world’s top CEOs can go into any industry and create a successful company.  They are visionary, which ironically is exactly how Apple became a powerhouse.  I’ll closely be watching what Richard Branson, who just offered the iPhone4 as a product for Virgin Mobile customers, will do in the coming months.
5.      Bite through the shark cage.  I teach companies the difference between “protection” and “defense.”  For example, people in shark cages often assume they are protected, while those who swim with the sharks know that is not true.  In Apple’s case, they over-protecting the past and not defending the future.  With very little difference between the iPhone4 and 5 and lots of the same corporate visuals, Apple looks stuck in its own history.  Meanwhile, sharks are continuously on the move, and although this might sound slightly cold, they are not sentimental.
6.      Eaten by its own school.  Sharkonomics equates Apple fanatics to a school of shark swimming with the leader.  But there is a blind spot to this approach.  Apple does very little to educate retailers about new products until they are already in the market.  With more products than ever, what does this mean for customer service and the overall consumer experience?  If a competitor like Samsung incorporates a better customer service component with a better technology solution, Apple’s school of followers might end up eating the company and moving to an alternative leader.