Published by Stefan Engeseth on december 31, 2006 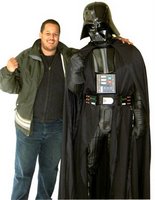 Haven’t meet George Lucas yet, but as you can see on this photo I did have a talk with Dart Vader (fan site). If you like to meet George Lucas you only have to go to this parade in California (sponsored by George). For me it sounds like a statement: May the force be with consumers 2007! He has invited 200 fans from the whole world to join him in a parade. Why can’t a Fortune 500 CEO do the same thing? I hope we will see that parade in 2007.

How far are you prepared to move your business forward?

Published by Stefan Engeseth on december 30, 2006

This is the key question I hope most business leaders ask them self for 2007. If they want an answer that will move their business forward 2007, they should ask their consumers.
How far will you go 2007?

Published by Stefan Engeseth on december 28, 2006

Some times a bad movie can be better really good, same rule goes for web sites. On Worst Web Design Ever you will find some of the best bad web sites in the world. The chocking thing is that one of them is a police site (we hope that they have arrested the web designer:-). Thanks to Lars Johansson, for having the ”bad taste” in a good way and sending me this fun link.

Published by Stefan Engeseth on december 26, 2006

Today my email inbox is so full that it is not an alternative to hit the subscribe button even if I would like to read one more newsletter. I just don’t have the time for it. Why can’t they offer me a solution that I can take it step by step to become a full subscriber?
When I order my newspaper I can try it for 3-6 mounts ore and then if I don’t like it I can cancel it. This is a smart way to get new consumers that are a little interested and involved in their newspaper. But with email newsletter it is only a 100% subscription I can find. Why not ask me if I would like to have 1-3 ore 3-10 newsletter as a test period, and then send me a question if I like to take the next step. In this way I could subscribe to a lot more newsletters and still have the felling of controlling inbox. I call this “Permission Success” and it is based on sales mixed with permission marketing. Read Seth Godin bestseller Permission Marketing, download the first chapter for free here.
Is there any examples of a good subscribe stair for newsletters?

Published by Stefan Engeseth on december 25, 2006

It close to the concept of Wikipeida but in a shopping version. ShopWiki co-founder Kevin Ryan is one of the Internet chief that’s provide tribes to rise above boring surfing.

”ShopWiki is a shopping search engine designed to help consumers find specific products on the Internet with ease. It is the only shopping search engine that combines advanced Web-crawling technology with consumer-written wiki buying guides to help shoppers make the most informed buying decisions.” ShopWiki.com

Instead of the Playboy girl next door you find your ShopWiki consumer next door.

“User-Generated Video Review functionality and to jump start user contributions is encouraging quality submissions by paying $50 for each of the first 500 videos selected to appear on the site.” Donna Bogatin, zdnet.com

On a transparent market this kind of sites can ad pattern and organization for consumers. What I find interesting with the user generated video review is that consumers don’t try to sell it, they are only telling the story of what’s good and bad with the product. Most adverting doesn’t deliver the consumers voice so consumers can’t trust them. In other words advertisers has a lot to learn from consumers voice. This user-generated shopping site is worth to check out, ShopWiki.

4,5 million born to be a consumer

Published by Stefan Engeseth on december 24, 2006

Every child that is born in Siena is a consumer and part owner to the MPS Group. Consumer founded this bank in 1472 together with government that was not satisfied with the solutions companies at the time was offering the people in Siena.

“In Italy the MPS Group consists of a network of over 1.800 branches, approximately 4,5 million clients and over 28,000 employees. Abroad, the MPS Group has branches and representative offices in the main financial locations in Europe and all over the world.” MPS Group (translation).

This is ONE of the oldest cases I now about and it is Siena one of the most beautiful cities I been in. Many of today’s bank are doing the same mistake as for 500 years ago, and they are facing the lost of consumers turning away to others. Why don’t they learn and why are they so conservative? Why don’t they let consumers be born inside their bank office?

Published by Stefan Engeseth on december 23, 2006

Let the best writers, editors, filmmakers, musicians and debaters create the content on your website. Let your customers help build your business. They will create value for themselves, you and your shareholders. Stefan asked me to write a list of websites where we can all be person of the year.

Join the revolution…
1. WordPress – Make your voice heard thanks to the king of blogs, and it’s free too!
2. Wikipedia – Who buys an encyclopaedia any longer? Users make certain Wikipedia is always up to date.
3. YouTube – Get your fifteen minutes of fame. Nothing is too insignificant to be shown on YouTube.
4. Del.icio.us – Find out what others who like purple bananas also like through social bookmarking.
5. Skypecasts – Talk to large groups of people about a shared interest.
6. MySpace – Few people over the age of thirty get it, but the social aspect of MySpace made it a hit.
7. Flickr – Share your photos.
8. digg – Influence the news.
9. Amazon – Online retail giant who understood from the start that customer reviews and recommendations based on people with similar interests add value.
10. Jumpcut – Edit your own videos online.
11. Last.fm – Discover new music based on what people with the same music taste like.
12. Xing – Professional networking, an alternative to Linkedin.
13. Netvibes – Create your own portal/home page.
14. coComment – Monitor your comments on blogs and add comments to websites.
15. Yahoo! Groups – One of several discussion groups.

Published by Stefan Engeseth on december 22, 2006

Never before have I seen so strong need to build tribes as 2006. People have build tribes around symbols, manifest, rituals and brands, hate & love ore anything (happy tribe around the Christmas tree). The person of the year 2006 was for Time Magazine YOU – I think the driving force behind al of this was the growing need for tribes and strong need to find the survivor tribe in a world full of meaningless wars/terror and melting planet. So keep on building “blogtribes” 2007. The question is which of doe’s blogtribes are going to make a difference for al tribes to survive?

Update afternoon:
A friend gave me a good point with the commercial dimension of the growing tribe trend. Consumer member clubs as Tesco Card ore IKEA family can now grow faster then ever before if they tap into the ONE YOU trend. They only have to update the management to 2007.

Free download of the new first chapter of ONE

Published by Stefan Engeseth on december 20, 2006

Published by Stefan Engeseth on december 18, 2006 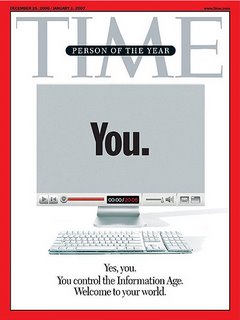 YOU are a revolution and now is your TIME. “Web 2.0 is a massive social experiment, and like any experiment worth trying, it could fail. There’s no road map for how an organism that’s not a bacterium lives and works together on this planet in numbers in excess of 6 billion. But 2006 gave us some ideas. This is an opportunity to build a new kind of international understanding, not politician to politician, great man to great man, but citizen to citizen, person to person. It’s a chance for people to look at a computer screen and really, genuinely wonder who’s out there looking back at them. Go on. Tell us you’re not just a little bit curious.” By Lev Grossman, Dec. 25, 2006 issue of TIME magazine.